Penguin Power Investigated by MIT and the Navy

The use of two oscillating blades that produce thrust by sweeping back and forth in opposite directions (similar to penguins swimming) has been found to be a highly efficient method of propulsion. This technology is currently being developed by the Navy and MIT. We are storing references to the development of this technology on this page, along with archived copies of some of the MIT web pages.

Engineers have tried for more than a century to improve on the simple but inefficient ship's propeller. The latest effort is based on penguin flippers. Massachusetts Institute of Technology researchers have built a propulsion system that utilized two oscillating blades that produce thrust by sweeping back and forth in opposite directions.

A 12-foot scale model of the "penguin boat" has shown promise in early lab trials. The blades achieved about 87% efficiency, compared with 70% in conventional ships - which translates into lower fuel consumption. MIT researchers calculate that converting only 3% of the U.S. shipping fleet to a propulsion system that increases efficiency by just 10% would save some $15 million per year.

Based on laboratory results, MIT's penguin boat is capable of moving as fast as conventional propeller driven craft - and it may be easier to maneuver. All this information interests the U.S. Navy, which supports the project through the Office of Naval Research.

And you get a boat that swims like a fish. Just as a penguin or sea turtle are a rigid body with fish-like flapping fins, Proteus is a boat that propels itself with two oscillating foils.

One hundred and fifty million years of evolution has enabled fish to develop extremely efficient technologies for aquatic propulsion and maneuvering. Recent experimental, MIT Robo-tuna, and computational studies confirmed this. However, because these studies were based on models with undulating bodies, direct application to ships and submarines is not possible. Our goal was to apply the promising "fish" technologies to conventional marine vessels pragmatically.

Success could mean the savings of millions of marine transport dollars and subsequent environmental damage, autonomous ocean research vessels covering more territory, and military submarines evading their foe because their "fish wake" is difficult to detect. An extensive literature review and discussions with marine hydrodynamics experts showed that efficient propulsion may be obtained by the oscillation of a foil without an undulating body. For example, large whales and other oscillating foil propelled animals requiring high efficiency employ the thunniform mode of swimming, which consists primarily of tail oscillation. Other animals, such as marine turtles or penguins, obtain efficient propulsion by pectoral flipper oscillation alone.

In this spirit, a boat foil propulsion design was developed with two foils moving out of phase so that thrust would be the only net force and vertical foil orientation allowing for the possibility of thrust maneuvering with thrust vectoring. The challenge of actuating the foils with the appropriate "fish" motion was first met with a prototype mechanical device capable of oscillating two foils with limited independent adjustment of the foil's heave, pitch, frequency and phase between the motions. First-ever autonomous operation and wake visualization experiments were conducted and yielded useful results. The shortcomings of the first mechanism where met with a remote controlled four-degree of freedom robotic mechanism. Advanced mechanical design and state of the art electronics allow this 3.4 meter long oscillating foil propelled boat to produce accurate efficiency measurements over a wide range of operating parameters. Results from preliminary experiments are very encouraging. 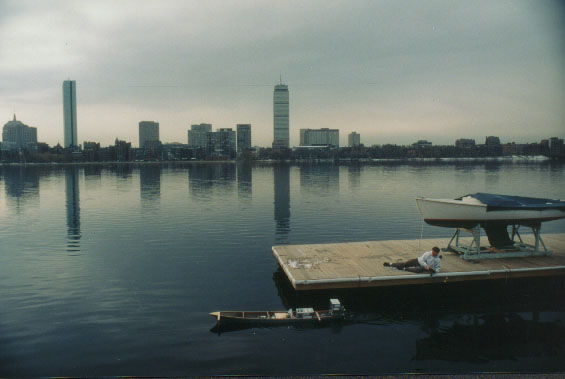 Proteus the Penguin Boat in the News 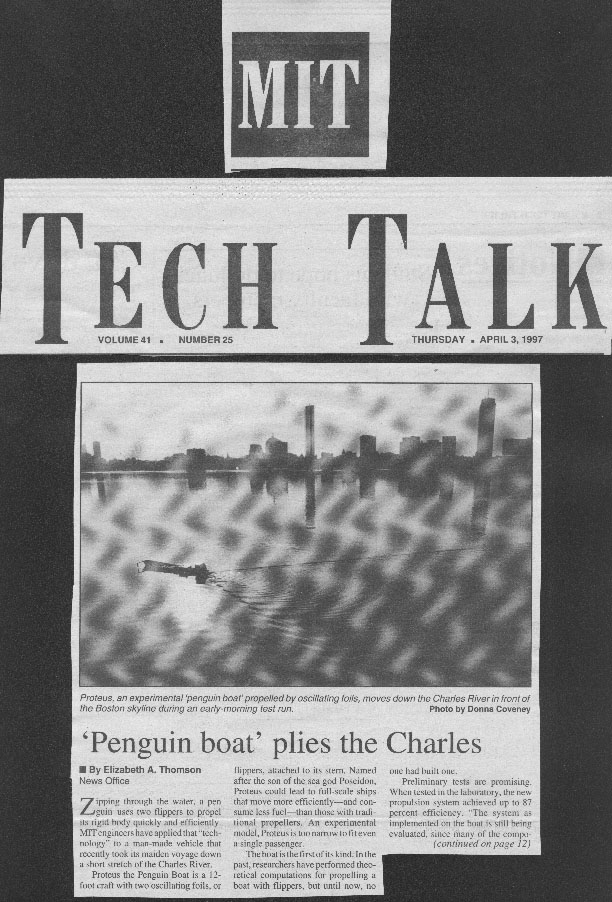 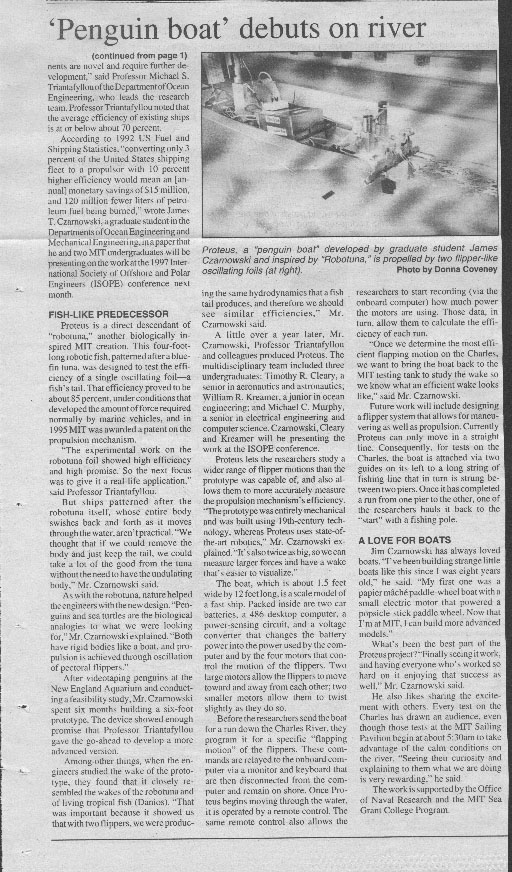 Proteus, an experimental 'penguin boat' propelled by oscillating foils, moves down the Charles River in front of the Boston skyline during an early-morning test run. Photo by Donna Coveney, MIT News Office.