RBBI / Polson Enterprises Inventions We've had some ideas we think could be of benefit to the industry and are posting them on this page for individual inventors or companies in the industry to develop. We make no claims as to their originality, marketability, patentability, etc, We just think they are good ideas. If you "make it big" with one of them we would appreciate you giving some to the credit to this site. If you would like a little more background information on one of them, drop us an E-mail at polsong@virtualpet.com or give us a call at (800) 443-6543.

Imagine a coiled spring about 3/8 inches in internal diameter and 18 inches long. Take a 2 foot long 3/8 inches in diameter fiberglass rod and jam about 6 inches of it into the open end of the coiled spring. Put a cheap tyvek or plastic flag on the other end of the rod. Provide a mounting for the other end of the coiled spring vertically about 6 inches behind the trailer hitch on the boat trailer. Now you have a fiberglass rod with a flag on it that reaches about 3 feet above the trailer hitch which makes it much easier to imagine where the hitch is as you back up the tow vehicle. Provide a "catch" that allows you to bend the coiled spring over toward the rear of the trailer and latch the fiberglass rod under a "catch". This catch could have the cross section of a "C" with the rod first going down past in and then allowing it to spring back up into the open end of the "C" . This would be a storing position for getting the rod out of the way during normal operation. To release the rod, just push it down out of the "C" catch and pull it slightly to the side as it comes up around the catch. If this doesn't make sense drop us an e-mail (see top of page) and we'll post a sketch.

This idea still needs some help, but the basic concept is to use a very slow rpm piston engine and to have some of the pistons firing like normal and some of them pumping water. The water comes from below the boat and is expelled out the back as a water jet. The water also cools the engine as it flows through it. Perhaps there is a better way to integrate an engine and a water jet? They seem to both run on a horizontal bearing supported rotating shaft or crank. If you could get the jet water to also function as engine coolant it seems like it would be a nice package. Maybe one of the development type engines (as seen in the Engine Links on our Other Useful Links page) has a better fit to this application than conventional automotive type engines?

Canoes and kayaks glide through the water because of their long thin shape which tapers back to a narrow area at each end. Recreational boats are wide (for passengers and space) and then chopped off bluntly to hang and outboard or stern drive off the back. Inboard are often put in boats that were basically designed for outboards and stern drives so they also have blunt sterns. "What if" their was a "well" in the boat where the drive is now, and they hull wrapped on around it and tapered back together at the rear. You would need to have a "step" to allow the water to come up to where the drive is and remain at that height as it exited that would form a line down the middle of the boat.

Currently the recreational boat hull have a huge amount of drag caused by the turbulence of the blunt stern. In addition to this, their is a large drag cause by the propeller trying to pull water away from the transom and a large suction drag due to the transom constantly trying to break loose from the water behind it (this creates a vacuum over the water covered portion of the transom, which creates a sizeable drag.

You could form some kind of appendage hull to test this concept and see if it bears any merit. If you want to really think wild, what it this add on were inflatable?

Here is a related clip you might find interesting from the November 14, 1994 issue of Business Week, page 79.
"To cut wind drag and boost mileage on a bus, try a 12-foot inflatable tail, say Texas Tech University engineer Herbert J. Carpenter. Its approved for use in Arizona."

Obviously there are a lot of center of gravity, turning, and stability issues to worry about, but it just might work????

How about a boat seat that stays put while the boat hull bashes up and down in rough water? It would make the ride much easier on older folks and might lure some more people into boating.

Some similar work has been done in cars, see Business Week 5 December 1994 story titled, "Smart Car Seats that Meet Potholes Halfway". It tells of engineer Farid M.L. Amirouche of the University of Illinois at Chicago developing a seat for people who spend a lot of time on the road. News of every pothole is relayed by electronic sensors in the suspension system to an on-board computer that compares data with mathematical models. The computer then orders actuators under the seat to absorb the shock before it reaches the driver. The article also says he is working on a system that compensates for the way road bumps affect the upper body. The system uses seat belt sensors and dashboard lasers to measure changes in the drivers head and body orientation.

Also snowmobiles are working in the area. The October 1996 issue of Popular Science page 17 shows a, "Suspension of Disbelief", from Bombarier that allows you to flip a switch "on the fly' to adjust the high-performance rear suspension system for different loads or trail types. The switch operates and air compressor that corrects the air pressure in the shocks.

As "baby boomers" age, they may no longer like getting beat to death by rough water. Women don't like being "all shook up". High end yatch types may be willing to pay for comfort. How about it???

"Prop Guard" has been a bad word in the industry. Companies fear that they might be required, that they will reduce performance, that boats without them might be considered dangerous, that they might cause even more or greater injuries, that they cost money, etc. The boating accident literature indicates that a large percentage of prop injuries occur when the boat is stopped or backing up and the prop is "in gear". Today's technology is developing all kinds of non contact sensors (light, motion, mass, sound, laser, heat, etc) to detect things and people in certain areas. Why not try to apply this technology to the transom area of the boat and if you detect people in the "danger zone" near the prop in the water and either electronically shift to neutral, set off an alarm, or handle it however you wish. It seems like a low cost "black box" with a few sensors might be and "add on" product that could sell like hotcakes??? It could also show the boating industry is really concerned about the issue instead of just trying to defend its position in court. The project would have to address the hot, wet, noisy environment plus the fact the boat is sometimes started up near a pier or some other inanimate object. Perhaps the technology could be refined to be forward looking as well and sense people in the water in front of the boat?

A small "black box" of potted electronics and sensors with an output connector or an internal horn could be marketed similar to depth finders.

If your still having trouble imagining this, check out these two stories.
"Miniature Radar". Nasa Tech Briefs October 1996 page 24

'Radar Revolution" (above) includes photos of a unit in a car tail light to detect objects behind a car.

And if you still don't think "it's time has come" check out the "Pet Department" heading on page 6 of the November 1996 issue of Sensors. It talks of a Catscram product offered by Alsto's Hand Helpers that uses passive infrared motion detectors to respond to the approach of a cat and responds with an ultrasonic horn. Catwatch is the outdoor version of the same device.

Over a year after being posted here, we posted an online presentation featuring this concept, complete with references. Since then additional information has been posted. It can all be reached from the presentation link.

The October 1995 issue of NASA Tech Briefs on pages 82 -84 describes an "Inflatable Pole" gun looking device that fires an extendable "hand". When not in use it collapses to 3 to 5 percent of its length. A nitrogen bottle inflates the 2 inch diameter fabric covered collapsed tube. Their unit can reach 20 feet and only weights 7 ounces. The reach can be controlled by a trigger as the unit is deployed. Doesn't this sound like a boat / lifeguard rescue device?? NASA has filed patents on the basic unit and is offering licensing for commercial development. A couple of photos are below. 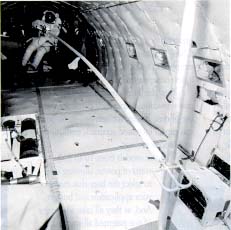